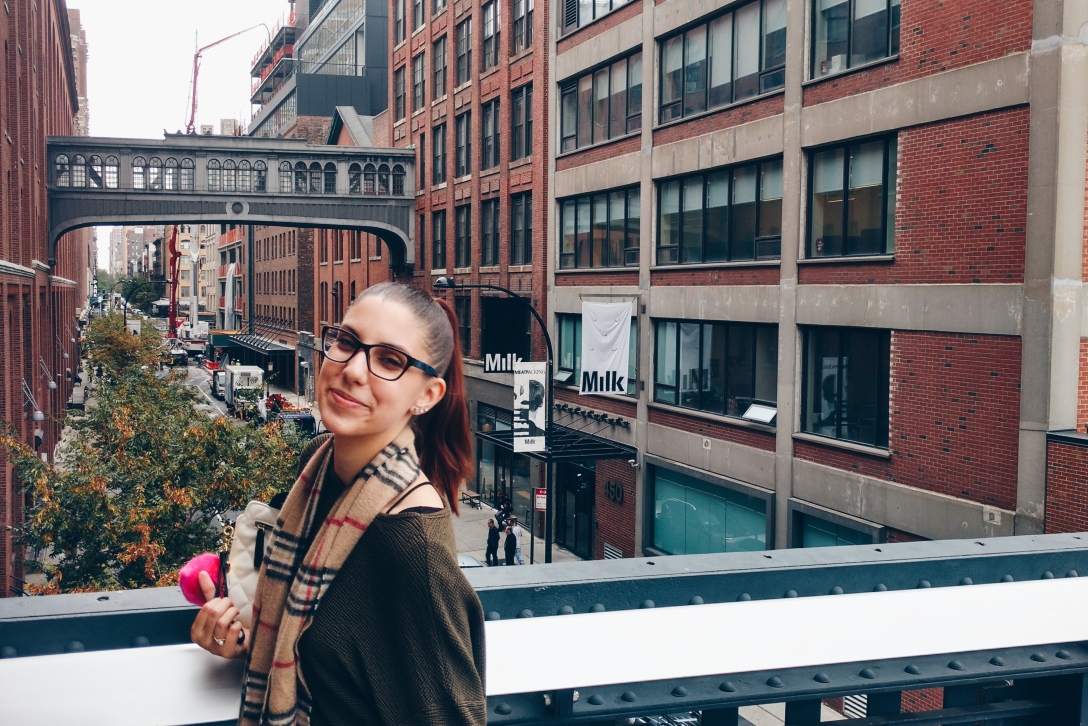 Let’s get back to that New York City trip!
Day two was a full and complete day of exploring for us. It really was the last “good” day because, although it was somewhat rainy (it “spit” all day), the following day was so wet and so cold that we simply weren’t dressed to enjoy it. And at that point, J’s feet hurt so much that continuing our exploration of a city on foot simply wasn’t a good idea. 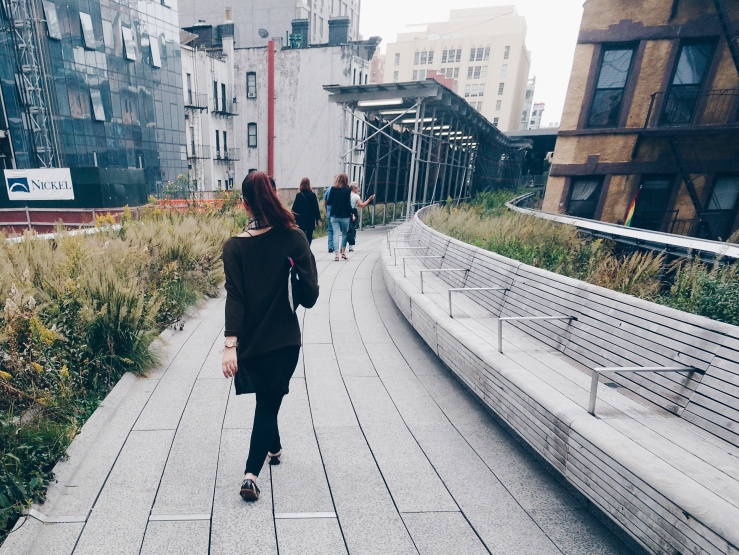 Day two started with a plan to walk the High Line. The High Line is an old raised railway that has now been turned into a walkway that brings you from mid-town Manhattan to the tip of Lower Manhattan. The walkway goes between old factory buildings and oversees some amazing spots on busy roads. The rails have overgrowth of plants, and art installations greet you along the way. It was a very unique way to walk the city without having to stop at intersections. It gave you a very unique perspective of New York.

It was also quite wonderful that the old station was turned into a marketplace. Little food vendors and artists set up shop there, at the halfway point, and it was a very lovely break between the walk.

We ended our walk with food at Bubby’s; a Jewish brunch/deli. Next to 9nine, it was easily the best meal! I was really impressed with the vegetarian options, and J had bagel and lox, which he said was one of the best he’s ever had. There’s nothing I like more, after a nice morning walk, than to stuff my face with delicious food!

Because the High Line brought us to the tip of Lower Manhattan, I was able to visit Three Lives Bookstore (I had heard great things, and it truly was a little wonder) and then make our way over to Kiehl’s . 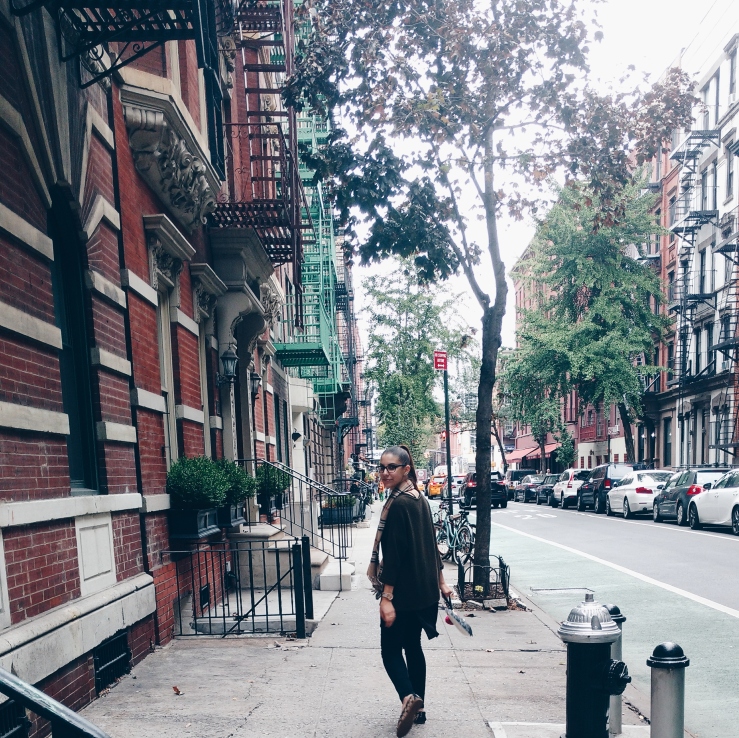 The rest of the afternoon, we started to take things slow. J’s feet were reaching critical status and he was limping everywhere, and I really just wanted to take in the city like a New Yorker; sitting back and enjoying it (that’s probably not how they do it, at all!). We took an Uber to Battery Park and I looked at my beautiful French lady of Liberty across the pond (I didn’t need to get any closer), and then we headed back into our “neighbourhood” by Times Square. 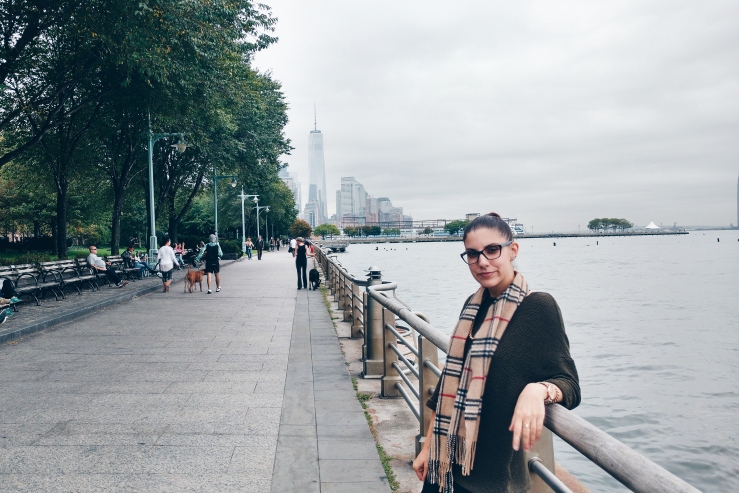 We explored a few shops in the area, before heading back to our hotel to relax for an hour prior to our Broadway show of the night: Aladdin!

Aladdin was pretty phenomenal! The stage design and costume were out-of-this-world. The colours and attention to detail were outstanding. They changed the story slightly for stage, and that makes sense, but it also was a bit upsetting to lose Abu and gain three random, chummy friends of Aladdin (I liked that he was a lone wolf — I could relate to that). I loved the diverse and multicultural cast, as I was terrified that an Arabic story would be played by only white people! And I thought the flying Magic Carpet (it was a drone!!!) was so, so neat.

But there were a few things I didn’t like about the show. Firstly, we had Jasmine’s understudy for our show, and oh, my, gosh… she was terrible. I mean, they clearly pick an up-and-comer to do understudy work, giving them an opportunity to try their talents on Broadway, but her singing was terrible, her portrayal of Jasmine was horrendous (Jasmine is NOT a whiney, high-pitched brat – she is a powerful, independent woman), and every time she was on stage, I cringed.

Also, they changed ‘A Whole New World’. What?! That’s the most iconic song in the film, and you go and CHANGE IT! It’s the one song that should have remained as a carbon copy of the original! How dare you attempt such sacrilege on such a sacred song!

Overall, it’s undoubtedly a performance I would recommend that anyone go and see, so long as you can get the tickets at discounted price! J and I had regrets that we didn’t see a more “stereotypical Broadway show” such as Chicago, but we will have to do something more authentic on our next trip.

Looking back on Day Two, it doesn’t seem like a lot was done, but I can assure you that the walks were endless. Taking in the city through walking and wandering was enough to truly enjoy it. I actually just finished a book called ‘The Wander Society’ that speaks to this idea of  wandering aimlessly to really be fulfilled. The day did feel full and complete, despite not much having been done.

And I suppose that’s why I feel the need to go back to New York City to truly get a better taste for it! Do you think I missed something important? Let me know in the comments!

2 thoughts on “I Woke up in the City That Never Sleeps! – My Awesome NYC Visit – Part 3”