Are women who stress equality and stand as self-proclaimed feminists truly advocating for the equity of all women, or just the ones who adhere to their thinking?

I have seen, all too often, women who fight in the name of “social justice” and “radical feminism” being just as hypocritically sexist as the many things they criticize. Too often have I see women turn on other women for merely thinking differently.

I noticed this, this morning, as I was attacked in a Women Living in Paris group for having a different opinion on gendered language. I stated that it did not offend me, because antiquated language does not impact me, emotionally, and how I feel about my status as a woman in the world. I ended it by emphasizing “This is just my opinion.”

I am making an active choice to not let my thoughts and feelings and emotional reactions to things that generally have no impact on the trajectory of my life. How I choose to consume language, and how I let it influence my thoughts is my choice. Just as all emotional reactions to external triggers can be controlled, letting something like gendered Latin language bother me can also be controlled.

This opinion – which I, as a woman, have a right to share in a social space – was heavily criticized by other women in the group. It didn’t become meaningful and beneficial discussion, nor constructive criticism (beyond one person – the OP), it just became attacking me. In fact, it became comments on me and my character: 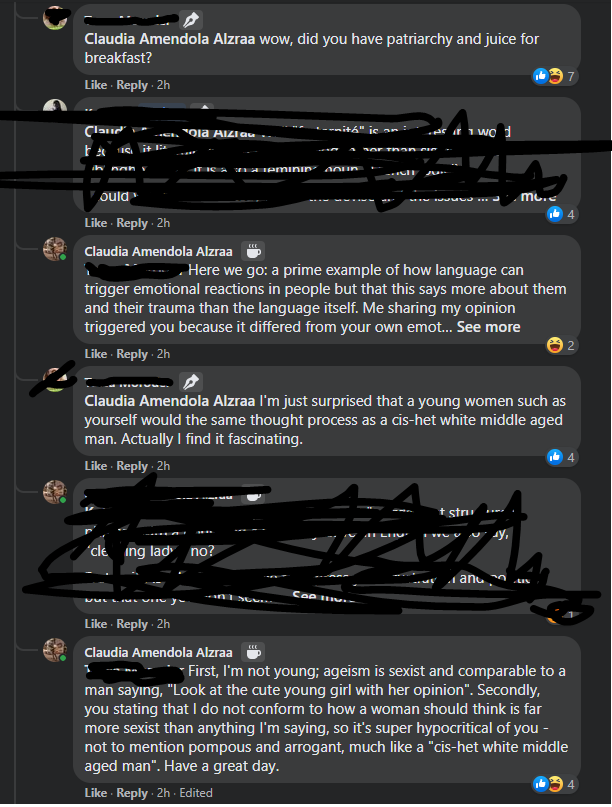 If you notice the emojis on my responses, they are laughter. Laughing at a woman for defending herself, insulting a woman for her thoughts, and criticizing her for not “thinking as a woman should” all for sharing my opinion. Not forcing it on others, not needing others to believe it. Just. For. Sharing. It.

This is just a sample of the many women who lurked my page and criticized me, insulted me, commented on my character for having such an opinion, etc. How dare I not be offened by gendered language, right? I deserved these attacks, right?

This is not a sympathy blog, this is a wake up to the hypocrisy blog. The absolute GAUL of so-called “feminists” who are “tearing down the patriarchy” and then act in this manner is astounding, and all too frequent. So, let me get this straight:

I’m sorry but… does anyone not see the irony in this? The same women fighting in the “name of feminism” and doing this are no different than the men of the 13th century, burning women for having an opinion, laughing at them when they were “out of place”, and tearing them down in public spaces.

If your fight is for true equity for women, that should look more like:

You should be ashamed to call yourself a feminist if you behave otherwise.

A feminist that has forgotten how to treat women is no better than a misogynistic man. In fact, she is worse, because she wears a self-righteous mask under the guise of caring for her fellow sex, standing on a pedestal of pride and tearing down women who “aren’t like her, the perfect feminist”.