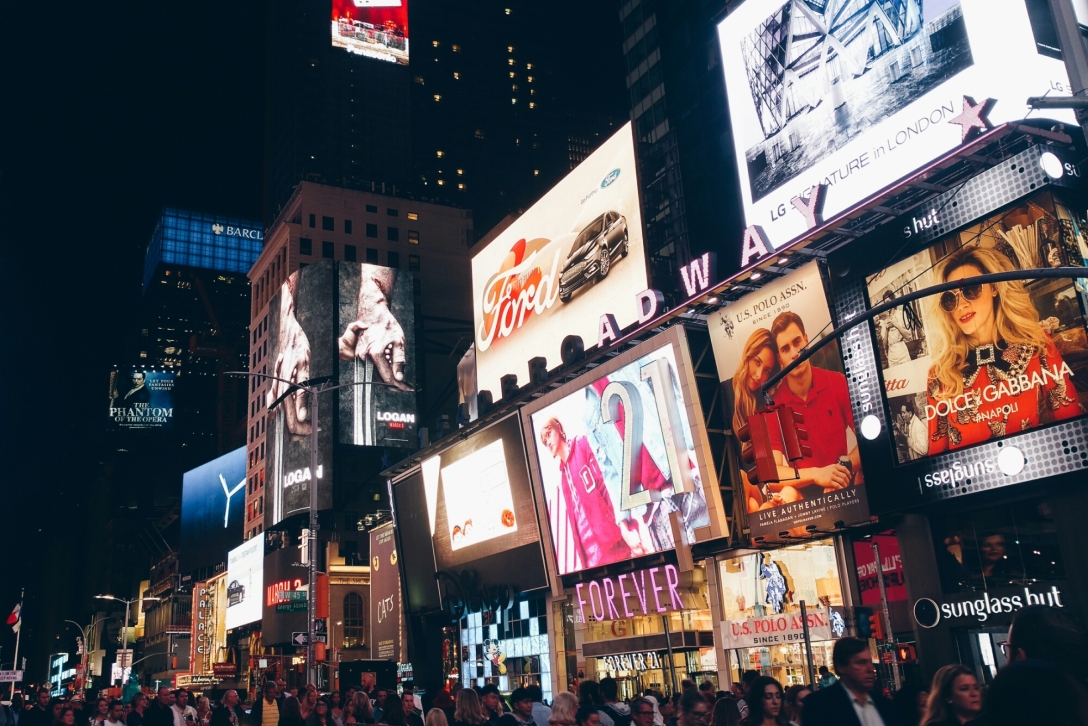 New York City. So often is it called the best city in the world. So frequently was I told how much I would love it. My brother also tried to tell me that I would forget about Paris with this visit. I’d like to mention, before I begin, that all the aforementioned rumors are, in fact, false.

Listen, New York City is really nice. And I’d be lying if I said I got to explore it all, because I definitely missed a lot of key visiting locations and need to go back again. But, best in the world? No way. Utterly amazing, so much so that I’ve fallen in love? No, also incorrect.

New York is a city like most American/Canadian cities. Okay, wait, that’s not totally true. New York City is significantly larger and more “happening” but along with that comes crowds and overwhelmingly busy neighbourhoods. There’s a lot of pushing,  a lot of homelessness, and a lot of in-your-face consumption. It’s a Western city; what did you expect?

But New York City also has Broadway, and that’s amazing! And it has some HUGE shopping destinations which are immensely impressive. And it has more history than a modern Canadian city has! Overall, I enjoyed the destinations I visited, the people were quite nice (majority of people thought we were New Yorkers and that was, in some way, an exciting compliment to me!), and the food was also very good. Those are three key aspects of a successful trip, in my opinion.

So, where should I begin with my sharing of my trip with you!? I’m going to break down my visit into key aspects/topics I’d like to make a focus for my blog, much like my Kiehl’s focus from yesterday (which I highly recommend reading). Let’s start with my hotel, my first day exploring the city, and Times Square…

I stayed at The Iroquois, thanks to the company I went to NYC to have a meeting with. 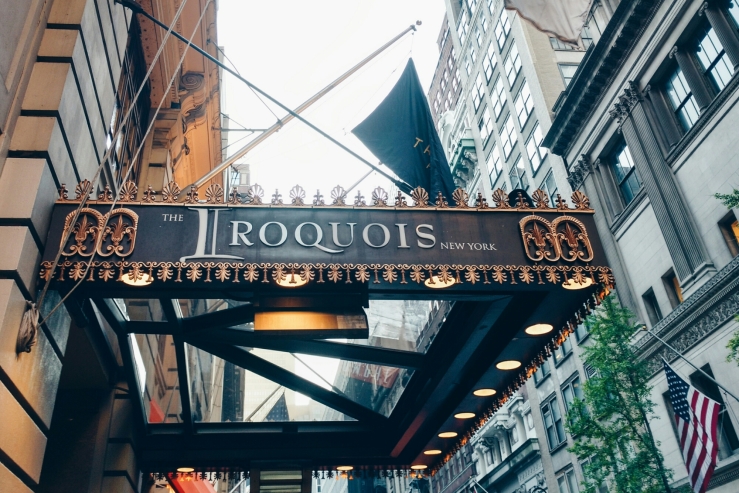 The Iroquois is beautiful, there is no doubt about that. Centrally located in Midtown Manhattan, it’s mere steps away from theatres, Times Square, and Restaurant Row (where fantastic restaurants line a gorgeous street). It’s safe, and it’s happening around The Iroquois. And we certainly felt too poor to be staying there (haha!)!
The service in this hotel is quite wonderful. The people working here don’t like to let their customers down and will go out of their way to assist. You can tell you’re in an expensive hotel when everyone around you is working to make your stay pleasurable.

But I would give it three stars.

And so, you may wonder why I’m giving it a three stars. It’s definitely not for lack of quality service but for some experiences that were weird and out of the hotel’s control.

It’s an old building, and, as such, the heating and cooling system is DAMN LOUD. If you are an individual who can’t sleep unless you have silence, you’re not going to enjoy your experience. When the heating turns on, it sounds like a freight train.

We also had two very strange experiences with the faucet in the shower. The first day we stayed and turned it on and a CHUNK of knotted hair flew out with the water! WHAT?! It was like something from a nightmare. This happened a SECOND time on our last day of stay. Same thing; chunk of knotted brown hair came from the FAUCET (not the drain!) with the stream of water! We told front desk and at this point already had payment approved for our room so we got a very deep apology and a bottle of wine and chocolates (there’s that amazing service, again).

We also had a situation where we scheduled a cleaning of our room with the front desk and we returned to an untouched room. Again, front desk were flabbergasted by this and gave us complimentary breakfast.

The classic building, the helpful staff and the location of the hotel make this a great place to stay, but the price gets questionable when you consider the aforementioned hotel building issues (and one-off cleaning concern). Granted, I didn’t pay for this hotel stay, but I was aware of what it went for, each night. ALSO! James Dean used to live in this building (when it was an apartment) so it kind of “ups” the coolness of the entire place — haha! 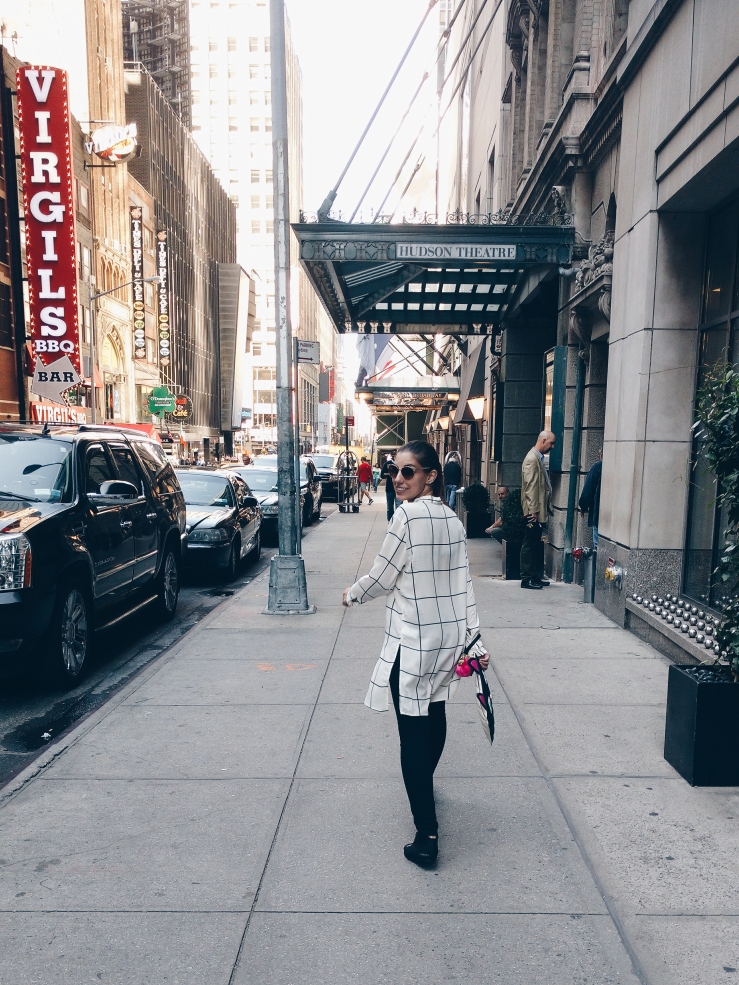 We arrived really late on Thursday night (delayed flight after delayed flight) but the following morning, I had a few moments to explore NYC on my own before my Uber came to pick me up for my meeting. My immediate experience of that walk to Times Square (only a block away, remember) was a negative one, as a construction worker said “hi” to me, with an immensely creepy look. Unwelcomed greetings; not a great start. But then as I walked into the crowd standing outside of Good Morning America by complete accident, I was back into the moment. I realized where I was. I was amazed by what surrounded me.

It was that night that I discovered the true wonder of Times Square. It’s so bright that it feels like day time, no matter how late the hour is upon which you wander the area. It’s really unlike anything I’ve ever seen before, but I’ve also never been to Japan (bucket-list destination #1!), which I imagine is quite similar.

New York City’s finest (NYPD) were everywhere, smiling at those who passed. Stores were begging me to come in (I loved the Disney store!). Street food beckoned me (endless pretzels, yes please!). It was a lot to take in, but it was amazing. Definitely a unique experience, one you’d only find in New York City.

After my morning meeting, J and I had the rest of the afternoon to explore the city. We started with lunch at 9nine, an Asian Fusion restaurant populated by business people on their lunch break, and it was, without question, the best meal of the trip. It was inexpensive but packed with amazing flavours and textures. It was a great start to the food experience that New York offers visitors.

I loved walking the side streets of New York. They were just like you see in the movies; fire escapes cascading down buildings, beautiful sets of stairs leading up to gorgeous, thick, old wooden doors, people sitting on balconies watching the streets below. It really had a cinematic feel no matter where you wandered. I liked this less busy side of New York City. It reminded me a lot of Toronto streets, but with unique, tiny shops I knew I wouldn’t find anywhere else. 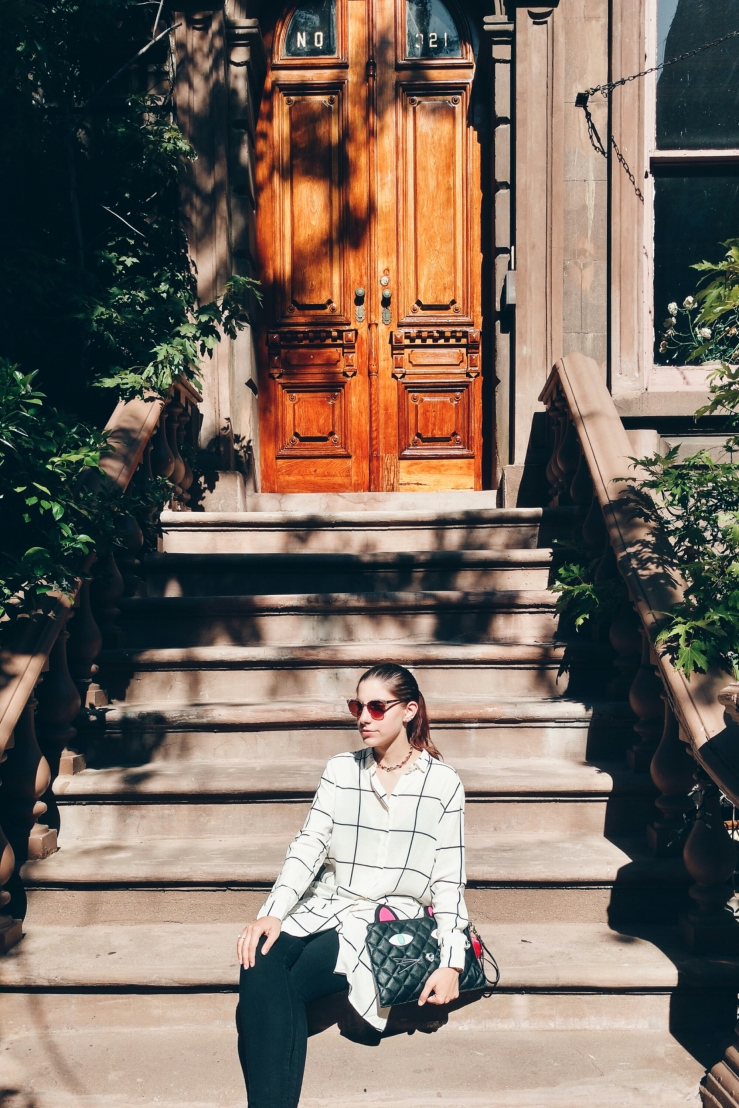 We continued this trek to the southern tip of Central Park and sat down to take in the city from a new perspective. Unfortunately, due to feet in pain and not enough time (2 days aren’t enough for NYC), that’s all of Central Park that we got to experience. I didn’t even see Strawberry Fields! So I will definitely have to return to explore that park more thoroughly.

After a bit of mindless wandering, we ended up on Madison Avenue, a street populated with really high-end stores, and made pretty famous to non-New Yorkers by the show Mad Men. I’m going to save that dream-street for another blog post…

We decided to purchase tickets to see a show that night – we went to see Game Grumps. Now, if you don’t know who Game Grumps are, they’re a big “lets play” comedy team on YouTube, and J and I are huge fans! (A side of me you likely didn’t discover from this blog — I’m a HUGE nerd.) The tickets were so inexpensive, and we knew we wouldn’t come across another opportunity like this, to see them. It was a complete fluke that NYComicCon was happening in NYC at the same time we were there, and we were lucky to stumble across these tickets on StubHub. It was a great show!

After the show, we had a late night dinner at Becco, Lidia’s restaurant on Restaurant Row. For a slightly more up-scale restaurant, the food was really underwhelming. The flavour choice seemed to be pepper, and not much of anything else. Considering Lidia is a food Goddess to many Italians, this was a disappointment.

We didn’t have an opportunity to go back to Restaurant Row, but it was a really impressive street (W 46th) with so many gorgeous little spots to dine in.

Day one, dipping our toes into what NYC had to offer, was a lovely success. I found the organization of lines for the shows to be immensely chaotic (especially for a big city who has a large focus on theatre), as we had to literally WRAP AROUND AN ENTIRE BLOCK in order to get into the theatre to see Game Grumps. We waited for at least an hour and a half. And I’m not kidding when I say wrap around a block; we did a full circle around the entrance. It was insane. 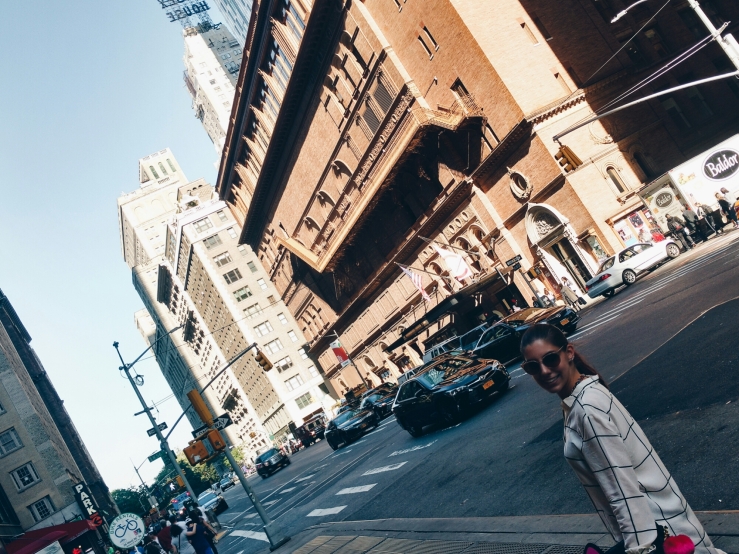 Stay tuned to the next blog post, as I write about my favourite spots on Madison Avenue, and then continue to share my trip with you! Thanks for joining me on my trip 🙂

Have you ever seen a show in NYC? Let me know, in the comments below! And if you haven’t, what show appeals most, to you?

View all posts by Cloud @ lifeofcloud.net

6 thoughts on “NYC Trip : Part 1 – Amazing and Exciting First Day, Exploring What the City has to Offer!”